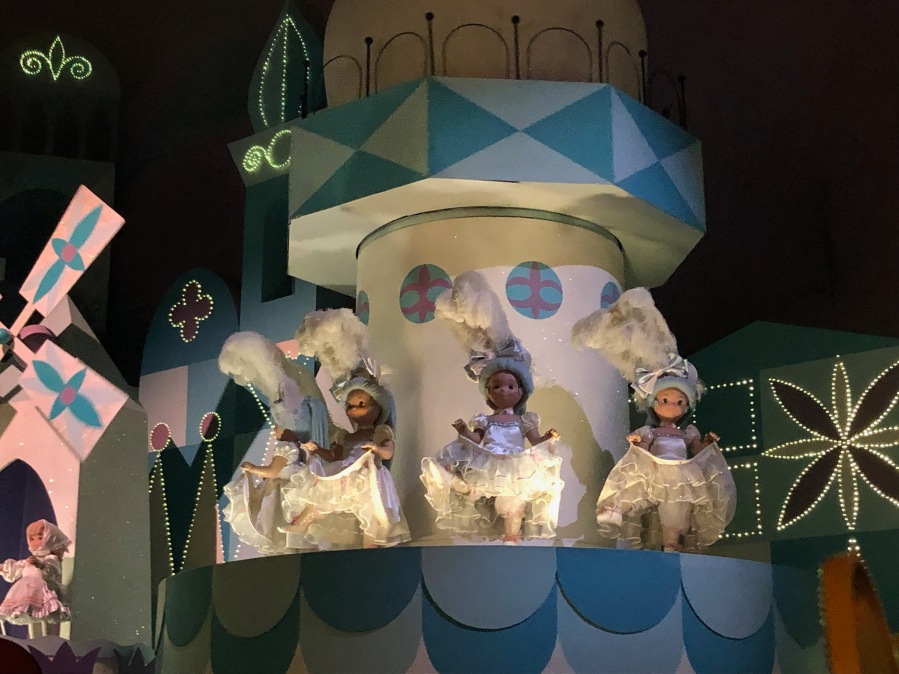 Day 5 took us to the Magic Kingdom. We weren’t expecting to do too much here because a lot of it is for the wee little kids, but we ended up doing quite a lot! I waited until we got closer to take the obligatory photo of Cinderella’s castle, and Tabitha was happy to see a statue of Donald Duck. Then, it was off to Adventureland!

Pirates of the Caribbean was first on our list. Tabitha loved it so much, we had to ride it again!

We took a ride on the river boat. Not all that exciting, but kind of relaxing, except that my feet didn’t touch the floor when I sat down (short people probs!).

We went next door to the Haunted Mansion. This was fun ride! I managed to get a kind of decent photo of the witch.

And, I mean, did you really go to Disney World, if you didn’t ride It’s A Small World? It’s like Disney law or something! At least that’s what we told Tabitha. Haha! Plus, I couldn’t miss my can-can and hula girls!

And, if I had to listen to this over and over, then so do you! Mwaahaahaahaa! (Just be happy I didn’t put it on autoplay!)

The spinny-spinny rides get a big ‘no, thank you’ from me, so it was all Tim and Tabitha on the tea cups!

We went to Tomorrowland where we rode the cars at the speedway, the Carousel of Progress, and Buzz Lightyear’s Space Ranger Spin. Despite its name, it does not spin in circles (thankfully!). It’s a shooting gallery kind of ride. It was fun. And we got to see Stitch! He’s so stinkin’ cute! Then we headed back to Fantasyland for our lunch reservations!

Lunch was at Be Our Guest restaurant. This place was so cool! The three rooms to eat in are the Grand Ballroom, The Castle Gallery, and the West Wing which is normally forbidden, but our waiter told us Beast was in a good mood and allowing people in it that day.

We had a great table in the Grand Ballroom that gave us front row seats for when Beast made his appearance! He actually made 3 appearances (bit of an ego on that guy), and Tabitha loved each one!

For the second course, I had the herb-salted pork tenderloin, Tim had the filet mignon, and Tabitha had mac n’ cheese. She said it was good, but she’s had better. At least she got a giant fry (that I, of course, had to take a photo of).

The dessert course was so yummy! A lemon and raspberry macaron, a dark chocolate truffle, and a white chocolate “Chip” cup with “Grey Stuff.” We were encouraged to “try the grey stuff, it’s delicious!” And it was. Tabitha got to “paint” her “Chip” cup. Our favorite of the three desserts was definitely the macaron!

Tabitha got an awesome light up cup too!

After lunch, it was a quick walk through Cinderella’s castle to the front of the park to catch the bus back to the hotel. We just missed Pooh and his friends which was a bummer. But, Tim and Tabitha got to see Merida riding a horse and a few other characters in a mini-parade. I was inside a shop at the time making a purchase.

The purchase was Tabitha’s Pride shirt! She also got a Haunted Mansion shirt (it glows on the dark!), and a “Stay Weird” Stitch shirt earlier in the day.

Back at the hotel for a goofy photo with Ed. And while Tim was napping, Tabitha and I had dinner in the room with a cookies n’ cream cupcake that was way too sweet!

Don’t be like a Stormtrooper and miss tomorrow’s post about our second day at Star Wars: Galaxy’s Edge! It was the best of the two days there!

Join 30 other followers
Follow Coffee with Laura Leigh on WordPress.com